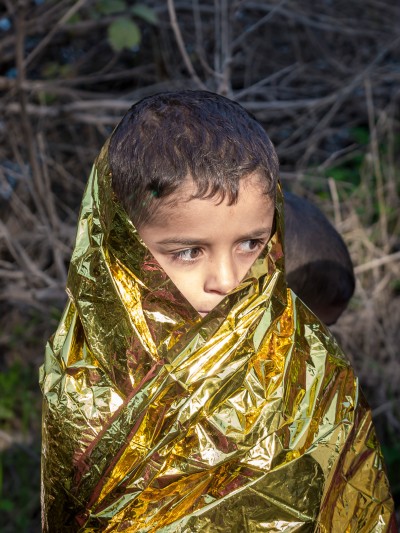 It has been more than four months since the Taliban seized power in Afghanistan. Many have fled the country with a vision of a safer future, only to find themselves hostages of a political stalemate on the borders of the EU. Instead of aid, Poland legalizes pushbacks.

A group of 32 Afghan migrants has been stuck on the Polish-Belarusian border since the middle of August. Without access to clean water, food or medical aid, they have been sandwiched between the border guards from both states, with no possibility to go either way. Their condition is deteriorating, and they are being refused access to health professionals.

Lawyers and civil society activists are not allowed to enter the zone due to the state of emergency that Poland has imposed on the border area in early September. The border guards are sabotaging any of the humanitarian activists' attempts to communicate with the group through megaphones (e.g. by turning on loud emergency signals). Thus, despite being on the border of the EU, the migrants are isolated from the entire world.

The Polish Ombudsman visited the border and urged the government to admit asylum seekers into Poland and provide them with humanitarian aid. The Council of Europe's Commissioner for Human Rights and the UN Refugee Agency came to a similar conclusion, while also pointing out that Poland is violating international law, specifically, the Refugee Convention.

The European Court on Human Rights (ECHR) also addressed the situation and, through an interim measure, ordered Poland to provide the group with water, food, clothing, medical care and, if possible, temporary shelter. Nevertheless, at the same time, the Court emphasized that such a measure should not be understood as requiring Poland to let these people into its territory.

Poland has failed to act. Hence, on 27 September the Court decided to prolong the interim measure “until further notice” and added a request to allow the necessary contact between the Afghans and their lawyers. Lastly, it highlighted that non-compliance might entail a violation of Article 34 of the European Convention on Human Rights for hindering “the right of Afghans to have recourse to the ECHR.”

Pushbacks instead of aid

Instead of aiding the people in need directly, the Polish government has many times offered to provide humanitarian assistance to Belarus, arguing that the refugees remain on its side of the border. In fact, a report shows that a part of the group had already crossed the border but was forcibly pushed back to Belarus by Polish border guards.

Regrettably, the Polish officers are doing so “legally”. According to a ministerial decree from August, the border guards are allowed to return those intercepted in the border area back to the border line. These people are then obliged to leave Poland's territory immediately. The Polish parliament also recently adopted an amendment on the law of foreigners which states that those crossing the border irregularly must leave the territory and will be banned from entering the country for 6 months to 3 years.

The law raises concerns among human rights advocates for legalizing pushbacks and hindering applications for international protection. It should be noted that such a national “legalization” does not relieve Poland from a duty to comply with international law. As the pushbacks are prohibited under EU and international law, the legislation may constitute a breach of Poland's international obligations.

Humans or a political instrument?

The situation of the 32 Afghans trapped on the EU's eastern border has allegedly resulted from a “hybrid warfare” orchestrated by Alexander Lukashenko. He is accused of organizing a new migration route to destabilise the region as revenge for sanctions imposed against Belarus.

Though their situation is extreme, they are just a part of a much broader issue. According to Poland, about 500 people try to illegally cross the border from Belarus every day. There is more and more evidence of Belarusian officers escorting migrants to the EU border and instructing them which way to go. Lukashenko recently admitted that his troops may have helped migrants cross the border, but denies responsibility for the crisis.

Polish prime minister, Mateusz Morawiecki, says that even though he truly sympathizes with the migrants, they are a political instrument. Most probably, yes. But does it mean that we can turn our backs to the humanitarian values that Europe is founded on? Some airlines, including Belarusian state-owned airline Belavia, restricted flights to Belarus and hundreds of migrants have been repatriated. However, many remain stranded in freezing temperatures at the border area with a lack of humanitarian aid. This political stalemate should, therefore, be solved as soon as possible.

Council of Europe, Commissioner for Human Rights. Poland should take immediate action to protect the human rights of people stranded at its border with Belarus. 25 August 2021 (https://www.coe.int/en/web/commissioner/-/poland-should-take-immediate-action-to-protect-the-human-rights-of-people-stranded-at-its-border-with-belarus?fbclid=IwAR2RlhmHO4tVTSlBaycvzC3exh2n2ZgpyjzHNcG0k4m6jwnFLsa9WcbnqwM).

Kochenov, Dimitry Vladimirovich and Grabowska-Moroz, Barbara. The EU’s Face in Łukašenka’s Mirror: Inhuman Treatment of Afghan Hostages at the Polish-Belarusian Border and the Promise of EU Values. VerfBlog, 26 August 2021 (https://verfassungsblog.de/the-eus-face-in-lukasenkas-mirror/).