Calls for the Establishment of a Special Tribunal for Ukraine 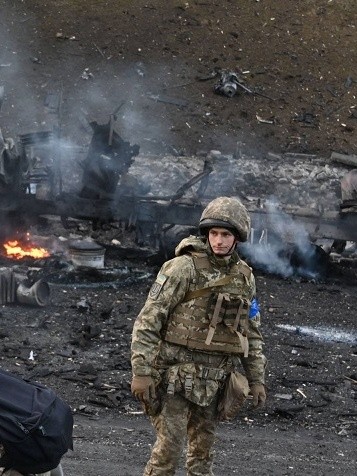 In September 2022, Czech Minister of Foreign Affairs, Jan Lipavský, addressed the UN Security Council as the first Czech in almost thirty years. In his speech, he strongly condemned Russian aggression against a sovereign state, expressed dismay at the crimes committed, mentioned the occupation of Czechoslovakia in 1968 and called on the international community to establish a special tribunal for the crime of aggression. The establishment of such a tribunal is supported and called for by other international actors. What are the current prospects for its creation? And are there other mechanisms to pursue justice?

The war in Ukraine has been ongoing for more than eight months and the situation on the battlefield is different every day. At the beginning of October, Russia illegally annexed the territories of Luhansk, Donetsk, Kherson and Zaporizhzhia. On the other hand, Ukraine is advancing in the east, succeeding in liberating the territories occupied by Russia at the beginning of the invasion and is currently approaching Kherson. One thing that unfortunately has not changed is the very frequent reports of alleged war crimes committed by the Russian army.

For example, mass graves with hundreds of dead civilians were discovered in liberated cities of Bucha, Irpin, Mariupol and recently also Izyum. Similarly, many separate crimes of various nature are documented almost every day. For instance, the attempted castration of a Ukrainian soldier and his subsequent execution. There have also been forcible transfers of the population to Russia or to Russian-occupied territories.

The perpetrators of these atrocities must be brought to justice and punished as soon as possible. Equally, those responsible for the aggression itself must be punished.

Investigation of the crimes

The International Criminal Court (ICC) opened an investigation into the situation in Ukraine in the beginning of March 2022. The situation was referred to the ICC by 43 State Parties to the Rome Statute. As of September 2022, Ukraine is investigating over 35 thousand war crimes allegedly committed on its territory by the Russian army. The ICC and Ukraine are not the only ones investigating the alleged crimes. Other countries, such as Estonia, Germany, Latvia, and the Czech Republic, are launching investigations based on the principle of universal jurisdiction. Although national and international investigative groups are working at full speed, it is still uncertain in which court the perpetrators will be held accountable.

The international debate on what court should try the crimes in Ukraine is far from over. The ICC and several national courts have already launched investigations, however, the idea of establishing a special ad hoc international tribunal for the crime of aggression to complement the above-mentioned courts is still the subject of extensive discussion.

Investigations at the ICC and national courts

Investigations at the ICC and national courts are already underway. An indisputable advantage is the speed with which investigations can be launched, as they are carried out by already functioning judicial bodies and there is no need to create a new body through a complex procedure.

This option is currently considered by the European Union to be the only feasible option under the current circumstances. In mid-July 2022, a meeting of EU Ministers of Justice took place in Prague, which was also attended by the Ukrainian Minister of Justice and the ICC Prosecutor, Karim Khan.

At a press conference after the meeting, the Czech Minister of Justice, Pavel Blažek, and the European Commissioner for Justice, Didier Reynders, proclaimed that a special tribunal for Ukraine cannot be established without the support of other world powers. Commissioner Reynders also asked all EU states to open their national investigations to Eurojust. Eurojust collects evidence of crimes in a shared database, where it is available to all states and also to the ICC. This evidence will enable EU states to launch national prosecutions against suspects. In fact, the ICC and Eurojust agreed to cooperate on the investigation of crimes as early as April of 2023.

The ICC has joined the Joint Investigation Team, which includes Lithuania, Slovakia, Ukraine, Poland, Latvia, Estonia and Romania, and its activities are supported by Europol. According to Minister of Justice Blažek, the Czech Republic is not involved in the international investigation teams, which includes Ukraine, and this is so that the evidence obtained by these teams cannot be challenged by nationals of the Russian Federation or by the Russian Federation itself for bias.

He stated that there is currently no consensus on what institution should deal with the crimes committed in Ukraine and clarified that European states would agree that the ICC would be such a court. This consideration was confirmed in October 2022 when, following a meeting of justice ministers in Luxembourg, Reynders asked Ukraine to ratify the Rome Statute.

“This is the first time that war crimes are being investigated while a war is being fought, so there is nothing tragic about the fact that it is not clear who will try them,” he added.

The idea of establishing a special tribunal first appeared soon after the war began. Already at the beginning of March 2022, a joint appeal was issued by several dozen academics calling for the establishment of a special tribunal to deal with the crime of aggression.

Aggression is a violation of the UN Charter, specifically Article 2(4). Aggression is generally considered the “mother” of all crimes and if it had not occurred, other core crimes, in particular war crimes, could not have been committed. It is therefore essential that the perpetrators of this crime be punished.

In June 2022, the Permanent Missions of Latvia and Liechtenstein to the UN organised a meeting that was held in New York and attended by a number of diplomats and academics who discussed the legal and political issues related to the development of the concept of a special tribunal.

During the meeting, it was proposed that the tribunal be established on the basis of an agreement between Ukraine and the UN General Assembly. This is also how the Special Court for Sierra Leone and the Extraordinary Chambers in the Courts of Cambodia were established.

The tribunal would only deal with the crime of aggression, which would be defined in its statute in the same way as in the Rome Statute. Other crimes under international law would be tried by the ICC or by national courts. It would be based in The Hague and its working languages would be English, French, Russian and Ukrainian. The tribunal would consist of Chambers with eleven judges, with three Pre-Trial, three Trial and five Appeal judges. There would also be an Office of the Prosecutor and the Registry, and these officers would be international and appointed by the UN Secretary-General. Territorial jurisdiction would include Ukraine, Russia and Belarus, and potentially other neighbouring countries.

The indisputable advantage of such a concept would be that heads of state do not have customary law immunity that would otherwise prevent their prosecution. Examples given here were the cases of former Liberian President, Charles Taylor, and the proceedings against Jordan before the ICC for failure to arrest then Sudanese President, Umar al-Bashir, where the Jordanian state faced proceedings before the ICC for failure to arrest and extradite the Sudanese President. The ICC held that in proceedings before international courts, heads of state have no immunities.

The proposal discussed at the meeting also stated that any amnesty or pardon would not be an obstacle to criminal proceedings before the tribunal.

Ukrainian and Russian points of view

In addition to the Czech Minister of Foreign Affairs, Jan Lipavský, as well as the Lithuanian President, Ukrainian President Volodymyr Zelensky is also calling for the establishment of a tribunal. He went even further than the participants in the New York meeting. According to President Zelensky, the existing institutions are not able to hold all the perpetrators of war crimes accountable, which is why he called for the creation of a special tribunal. In September 2022, Zelensky set up a working group to deal with the creation of the tribunal.

Russia also wants to establish an international tribunal. According to the head of Russiaʼs Investigative Committee, Alexander Bastrykin, Russia has opened over 1 300 criminal proceedings in connection with the “events in Ukraine”, investigating more than 400 people. Some of them are accused of crimes against peace. As of the end of July 2022, 92 commanders of the Ukrainian armed forces have been charged. Also citizens of the United Kingdom, the US, Canada, the Netherlands and Georgia are being investigated.

According to Russia, the UN is controlled by the West, and it would thus cooperate with its partners such as Bolivia, Iran and Syria in the tribunal.

One can only hope that the war in Ukraine ends as soon as possible, and the perpetrators of the committed atrocities will be brought to justice. It is good to see the progress that has been made in relation to the possible establishment of a special tribunal. The initial academic debate is beginning to translate into the concrete outlines of a possible future tribunal. Hopefully, justice will be served.

European Pravda. 2022. STATEMENT CALLING FOR THE CREATION OF A SPECIAL TRIBUNAL FOR THE PUNISHMENT OF THE CRIME OF AGGRESSION AGAINST UKRAINE. Retrieved from: aad78ad-combined-statement-and-declaration-1-.pdf (eurointegration.com.ua)

ICC. 2019. Judgment in the Jordan Referral re Al-Bashir Appeal. Haag. Retrieved from: https://www.icc-cpi.int/sites/default/files/CourtRecords/CR2019_02593.PDF.