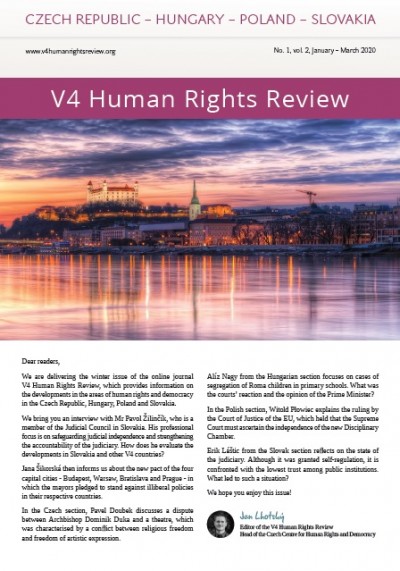 You can download the spring V4 Human Rights Review here.

We are delivering the spring issue of the online journal V4 Human Rights Review, which provides information on the developments in the areas of human rights and democracy in the Czech Republic, Hungary, Poland and Slovakia.

We bring you an interview with Mr Pavol Žilinčík, who is a member of the Judicial Council in Slovakia. His professional focus is on safeguarding judicial independence and strengthening the accountability of the judiciary. How does he evaluate the developments in Slovakia and other V4 countries?

Jana Šikorská then informs us about the new pact of the four capital cities - Budapest, Warsaw, Bratislava and Prague - in which the mayors pledged to stand against illiberal policies in their respective countries.

In the Czech section, Pavel Doubek discusses a dispute between Archbishop Dominik Duka and a theatre, which was characterised by a conflict between religious freedom and freedom of artistic expression.

Alíz Nagy from the Hungarian section focuses on cases of segregation of Roma children in primary schools. What was the courts’ reaction and the opinion of the Prime Minister?

In the Polish section, Witold Płowiec explains the ruling by the Court of Justice of the EU, which held that the Supreme Court must ascertain the independence of the new Disciplinary Chamber.

Erik Láštic from the Slovak section reflects on the state of the judiciary. Although it was granted self-regulation, it is confronted with the lowest trust among public institutions. What led to such a situation?

We hope you enjoy this issue!